Hello Disney fans! We just came back from our very first Disney cruise last week and, oh my goodness, was it incredible! (We will share every detail in an upcoming blog post, but stay with me here.) A few weeks before we were set to leave on this wondrous adventure, my husband and I were watching yet another vlog from Mickey’s Not So Scary Halloween Party at the Magic Kingdom. I sighed, longing to see the Boo To You Parade and Hallowishes fireworks in person. Then I did what I do from time to time and checked to see if there were tickets for the party available the night before our cruise shipped out (because, remember, there’s no harm in looking!) I think you know where I’m going with this.

SO, our plan changed. We would leave Saturday instead of Sunday, add a night at our cheapie Cocoa Beach hotel, drive out to Orlando (about an hour from our hotel) book a lunch at a resort near the Magic Kingdom, and attend the Halloween party (knowing we would be exhausted the morning of the cruise, but as long as we could get our bodies and luggage on the shuttle, all would be well.) It was not cheap. There I said it and I regret nothing! This was not our most budget-minded move, but more in the vein of, “you only live once and why not go crazy once in a while” But we were so excited–we were going to Mickey’s Not So Scary Halloween Party! 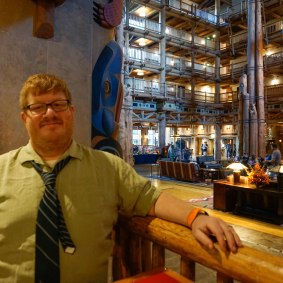 Sunday afternoon, we drove straight to Disney’s Wilderness Lodge where we had lunch reservations at Whispering Canyon Cafe, one of the many restaurants on my Disney dining wish list. We were early and toured the lobby and grounds of the resort, taking photos in our costumes (Princess Anna, Jyn Erso, and Nick Wilde) with the resort as a gorgeous backdrop. We knew the servers at this establishment had a reputation for acting sassy to guests (on purpose!) so we were ready when the server threw a handful of straws and bev napkins on our table. The food was really good comfort food. Barbecue and bison burgers are the highlights. We finished our meal amused and satisfied and made our way to the boat to Magic Kingdom. 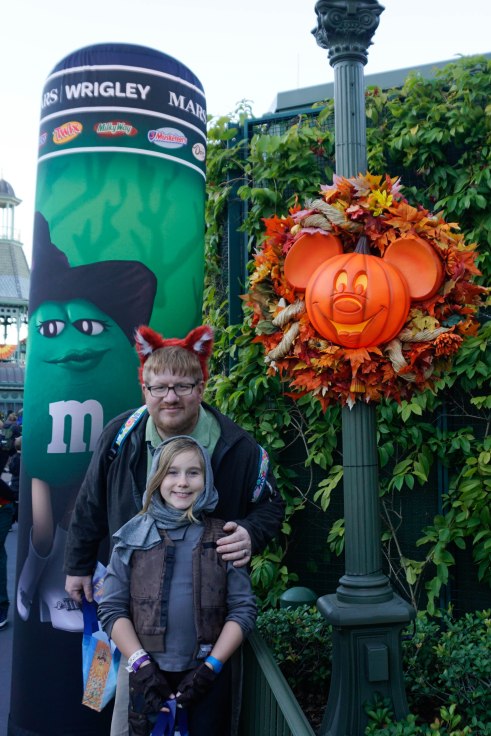 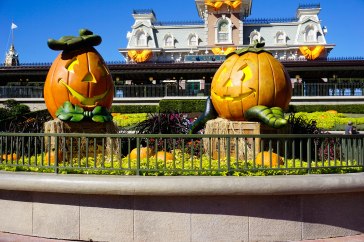 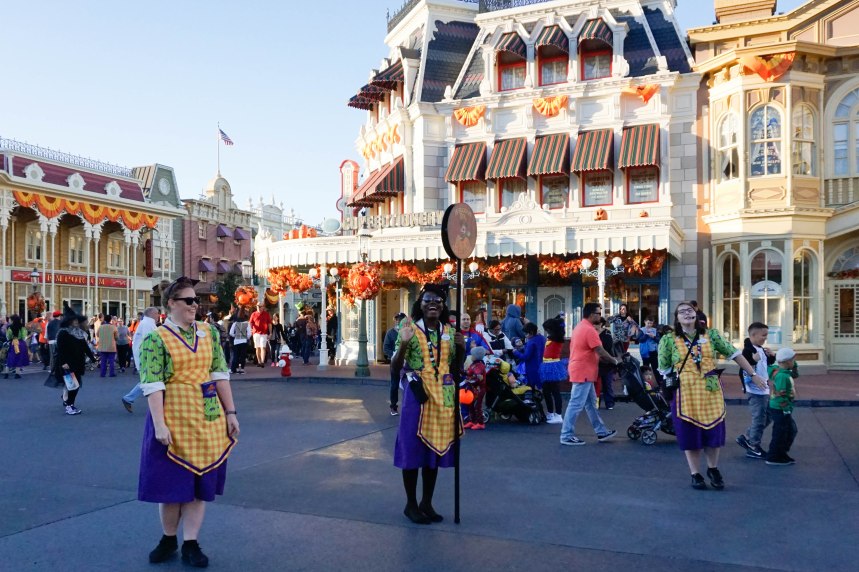 The ride over was serene but cold! I was oh so glad I had made a simple Anna-esque cloak lined in velvet to keep out the wind that was kicking up. It would indeed feel like a Halloween night at this party. We docked at the entrance to the Magic Kingdom at about 3:30, got through bag check and waited with a crowd of people at the entrance gates. I got a chance to see the other costumes and there were some really creative ones and some really simple ones as well. At about 3:50 they started letting people through the tapstiles. We gleefully entered, got our wristbands, and got our picture taken at a Photopass location right in front of the train station, There was no wait for this as I guess people were eager to get into the park.

We had made a couple of fastpasses for Peter Pan and Space Mountain, both of which had insane wait times (when did Disney get so busy in October?) After riding those we did Peoplemover and got our first seasonal treat, which was candy corn ice cream from Auntie Gravity’s Galactic Goodies. Wouldn’t you know, my husband licked it before it could be photographed. It was tasty, and luckily for me, didn’t taste a whole lot like candy corn. We headed towards Main Street on the train from Fantasyland, as it was getting close to party time. We followed the signs to a path behind Main St. where the party festivities were gearing up. We got our trick or treat bags, and got a chance to check out some exclusive party merch (I had to get the 2017 MNSSHP pin with vampire Mickey. So cute!) and hit our first candy spot. 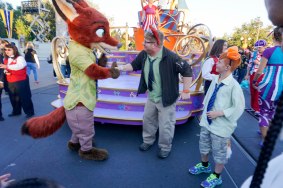 We headed over to Adventureland and rode Pirates of the Caribbean, which was walk on, then hit some trick or treat spots, marked with large inflatable pillars. We happened upon the Cadaver Dans in Frontierland doing a great show of music and bad bad jokes. It was absolutely fantastic. Brer Rabbit was just hanging around in Frontierland causing general mischief and taking selfies with fans. It confirmed that Frontierland is one of my all-time favorite parts of the Magic Kingdom.

We focused mainly on special entertainment and Photopass spots, as there were many spots with “magic photos” especially for the Halloween party. We checked out several character meet and greets, but for us, waiting in lines didn’t seem like a good use of time. Characters like Moana, Jack and Sally, and the Seven Dwarfs had the longest lines. It seemed like when we did get in line, the characters were about to join the parade and wouldn’t be back for 30 minutes or so. That was kind of disappointing. We skipped the first parade, opting to catch the later showing, and headed to the hub area when it was over to get a good spot for Hallowishes fireworks show. We stood off the hub, near the Plaza Ice Cream Shop. What an amazing show! I was so awed.  And the crowd was more sparse than I thought it would be, so we really did have a great view of the castle and pyrotechnics. 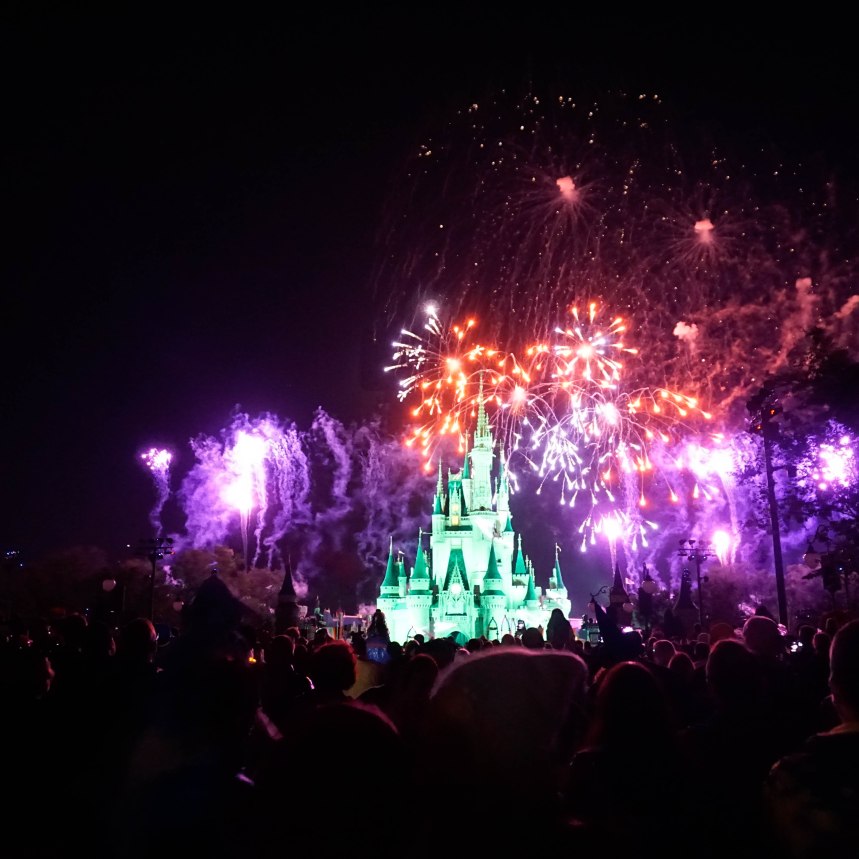 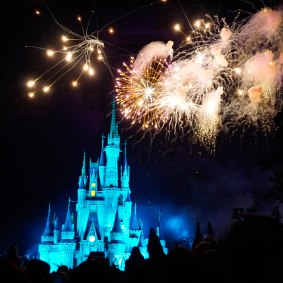 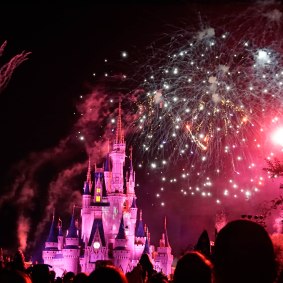 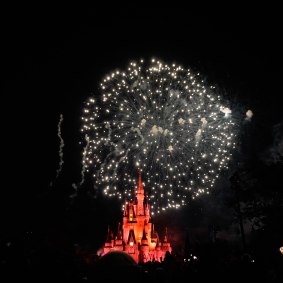 It was time for more eating and trick or treating. We made our way back to Frontierland where we would watch the second parade showing. It was a spectacular parade. I love the “Boo to You” song and play it on Youtube all the time now. It’s so darn catchy. I wish we had been in a spot with slightly more light for picture taking, but it really made the parade more spooky. 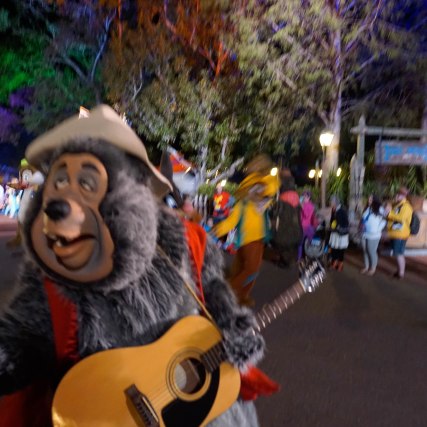 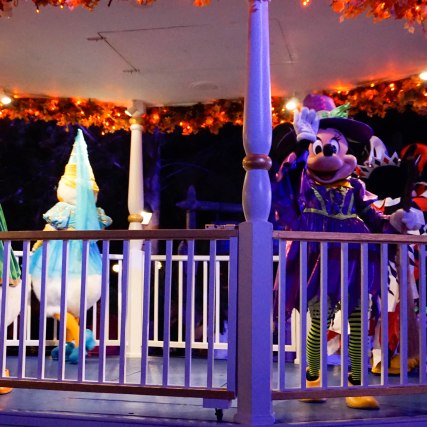 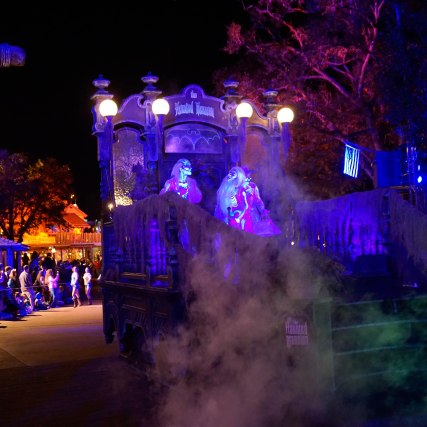 We ended out the evening by (finally) riding Haunted Mansion. All the cast members were dressed even more morbidly that usual. We caught some of the last showing of the castle stage show “A Hocus Pocus Villian Spectacular” but it was indeed midnight and our petite Cinderella was done. We stopped along Main Street and got some last minute photos and caught the bus back to Wilderness Lodge. My poor husband then drove us back to Cocoa Beach as the little one and I promptly passed out. What a great night! I highly recommend this party (as well as Mickey’s Very Merry Christmas Party.) The tickets can be expensive, but it’s worth it to cut back somewhere else to make this fit in your budget. The chance to dress up as a favorite Disney princess in the Magic Kingdom is not something you get to do everyday and it was a night I’ll never forget! 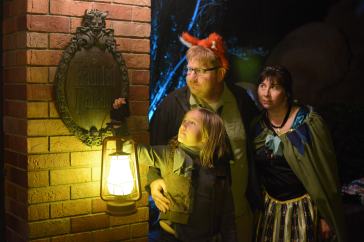 We Started a Podcast!

Inspiring you to find your own fun

a father and daughters magical time and creations

It's a big beautiful world, let's get out there and explore it!

Tips and tricks for traveling to "The World" with younger kids

Just a teenager blogging about everything Disney with a little bit of pixie dust, of course!